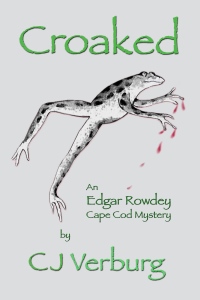 “If Lydia Vivaldi hadn’t tried to read the Cape Cod Times Help Wanted ads while driving, she wouldn’t have wound up on the side of 6A with a flat tire. Her yellow Morris Minor wouldn’t have caught the eye of Alistair Pope, passing in his vintage Mercedes. Lydia wouldn’t have joined Alistair at Leo’s Back End for lunch; Leo wouldn’t have hired her to replace his assistant cook, Sue, who had just stormed out in tears after Leo diluted her split-pea soup; and the murder rate in Quansett, Massachusetts, might have stayed at zero.”

Just about now, at the end of May, is when Lydia Vivaldi fled Cambridge for Cape Cod and launched “Croaked: an Edgar Rowdey Mystery.” To celebrate that benchmark and the verge of a new summer, Boom-Books is offering $1 off the Kindle e-book on Thurs. 5/22 ($2.99 instead of $3.99).

Thanks to RP Dahlke & All Mystery Newsletter for inspiring and promoting this 1-day sale!

I’ll be on Cape Cod for the actual anniversary, and to see Rick Jones’s 2014 show at the Edward Gorey House: “F is for Fantods: an Exhibit of the 28 Books of Edward Gorey’s Fantod Press.” According to rumor, this is the best show ever since Edward’s house became an artistic and biographical museum.  Catch it if you can!

You’re also invited to donate to Chris Seufert’s Kickstarter campaign for his Edward Gorey film. Chris reminds us that although the campaign reached its original target, much more money is needed to cover Mooncusser Productions’ expenses, including use of as much of Edward’s art as they can afford.