If Edward Gorey could see the diverse and unpredictable directions his legacy has taken, he might be most amazed by the annual Edwardian Ball.

Every January, about a month before his birthday, Gorey fans in San Francisco and Los Angeles gather to celebrate this New England artist’s tongue-in-cheek depiction of the dark side of Agatha Christie’s Britain. Ironic? Edward Gorey visited California just once, on leave from his U.S. Army posting in Utah, to meet up with his Chicago friend Consuelo Joerns, then a student at Mills College. He never set foot in Britain except for a single foray to the Hebrides. Once he moved into his sprawling antique home on Cape Cod, it was a challenge to lure him even to Providence or Boston.

Yet Californians have not just embraced Gorey’s England but colonized it. This just in, via Facebook:

**UPDATE** We were just informed Dark Garden Unique Corsetry has 30 tickets for Saturday night available in-store. First come, first served. Online tickets are sold out. Be sure to RSVP for their Styling Party on January 9th. 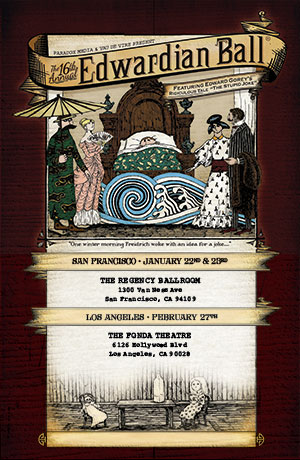 After Friday night’s global adventure, we return to The Grand Ballroom for the most decadent night of our season! This is the night that started it all, The Edwardian Ball, presented by co-hosts Rosin Coven and Vau de Vire Society.

Ballroom dancing leads way to stunning performances both on and offstage in a collage of fashion, theatre, music, circus performance, and dance. Each year, The Edwardian Ball presents a featured Edward Gorey tale in an original stage performance. This year’s event takes a unique turn, with Edwardian founders Rosin Coven teaming up with longtime collaborators Dark Garden Corsetry in a presentation of Gorey’s ridiculous tale, “The Stupid Joke.” Expect anything but stupidity as these masters of their craft collaborate in an unforgettable tale of a poorly planned joke gone incredibly wrong…

And in the spirit of celebrating all things Edward Gorey, Ball co-hosts The Vau de Vire Society present a series of vignettes throughout the evening paying homage to the most controversial works of the (in)famous illustrator…guaranteed to pop corsets and ruffle coat-tails!

If you prefer (as Edward Gorey did) to enjoy your frissons from the comfort of your own sofa,