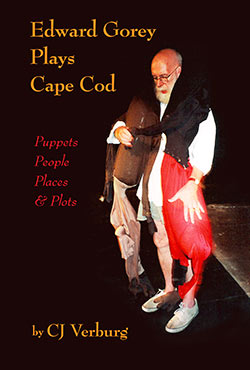 Did your Thanksgiving dinner give you sticker shock?  Be of good cheer!  While turkey, yams, and pumpkin pie–as well as the plates, the table, and the floor beneath–might have gone up this year, the price of books has plummeted.  You can e-read from now until New Year’s for less than it cost you to drive over the river and through the woods.

Boom-Books is celebrating Black Friday, Cyber Monday, and the weekend in between by giving out “Edward Gorey’s Stealth Career in Theatre” for free on Amazon!

That’s right: from midnight on Thanksgiving Day until midnight on Monday, Dec. 2, just click on the link above for a free copy of this literary aperitif.  If you’ve ever been curious about Edward Gorey as an artist, writer, and human being, but not sure you’re $15 worth of curious, now’s your chance.  This mini-ebook is also an ideal way to find out if my multimedia paper book Edward Gorey On Stage (which is available as an e-book, too) is the perfect holiday gift for your friend who has everything.  Read reviews here!

If romance is more your 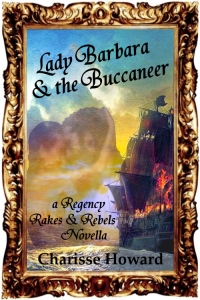 style, Boom-Books has a special deal for you on Sunday and Cyber Monday, Dec. 1-2.  Charisse Howard’s brand-new “Regency Rakes & Rebels” novella Lady Barbara & the Buccaneer is FREE from midnight Saturday until midnight Monday.

The Regency wasn’t all nuanced flirtation between young English ladies and gentlemen.  In those days the British Empire reached around the world like a giant squid, from South Asia to the Gulf of Mexico.  Lady Barbara Poole, who fled to the Louisiana Territory after her English father’s death, can’t resist one last fling at a Carnival held by the Gulf pirate Jean Laffite and his band.  The last thing she expects is to be swept off her feet by the notorious Black Buccaneer.  Who is he, and what does he want with her?  Not until she returns to London does Barbara discover the truth behind their unforgettable night of passion.

Which thriller author will be the first to turn Andy Greenberg’s November 18 Forbes story into crime fiction?

And will s/he be assassinated before the movie comes out?

…Last month I received an encrypted email from someone calling himself by the pseudonym Kuwabatake Sanjuro, who pointed me towards his recent creation: The website Assassination Market, a crowdfunding service that lets anyone anonymously contribute bitcoins towards a bounty on the head of any government official–a kind of Kickstarter for political assassinations. According to Assassination Market’s rules, if someone on its hit list is killed–and yes, Sanjuro hopes that many targets will be–any hitman who can prove he or she was responsible receives the collected funds. 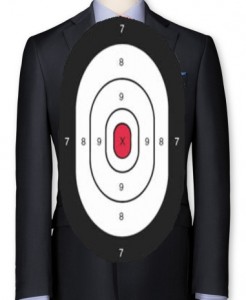 Greenberg tells us that top targets–prominent figures who’ve already had bitcoins pledged toward their murder–include President Barack Obama and Federal Reserve Chairman Ben Bernanke.  Sanjuro’s goal is ‘to destroy “all governments everywhere”‘ by triggering the deaths of so many politicians that no one dares to hold office.

‘“I am a crypto-anarchist,” Sanjuro concludes. “We have a bright future ahead of us.”’

Sanjuro chose his name partly in “homage to creator of the online black market Silk Road, who called himself the Dread Pirate Roberts.”  Back in September, Greenberg wrote a parallel story about Roberts and his illicit empire, “the Web’s busiest bazaar for heroin, methamphetamines, crack, cocaine, LSD, ecstasy and enough strains of marijuana to put an Amsterdam coffee shop to shame.”  Although it was busted not long after appearing in Forbes, “Roberts’ eBay-like service was grossing $1.2 million a month in the first half of 2012” and subsequently “doubled its product listings.”  Ironically, Silk Road was a job-creator for the U.S. government, keeping not only the FBI busy but also the Postal Service, which delivered the company’s vacuum-sealed products. 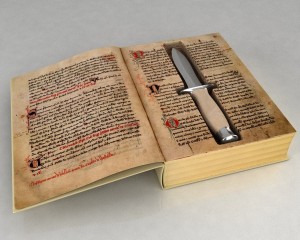 For a publisher like Boom-Books, which specializes in Mystery, Romance, & International Intrigue, the “virtualization” of large-scale crime has staggering implications.  On the one hand, can a vivid action novel be written about skulduggery which in multiple senses is invisible?  Drugs and violent death are tangible; bitcoins and the extremely secretive Tor network (on which both these enterprises operate) exist only as code.

On the other hand, what is the responsibility of authors and publishers toward the larger community?  How do we define that community in a world that increasingly is both international and virtual?  Where is the line between utilizing material, capitalizing on someone else’s crimes, and enabling or even encouraging those crimes?

This is far from the first time we’ve been faced with these questions, but never before have the answers had such potentially vast and grave consequences. 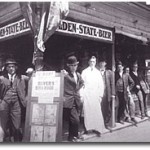 In the 21st-century publishing Gold Rush, as in Gold Rushes past, most of the riches don’t go to the miners, but to the entrepreneurs who sell to the miners. That’s why enough online book-services companies have popped up in the past decade to fill a phone book. (Remember phone books?)

Once upon a time, book fans wondered:  Can Apple can beat out 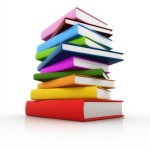 Amazon? Is Kobo the Canadian Amazon? Will B&N leap into the gap left by Borders before Amazon fills it? Now it’s a hot race for second place. (Remember Lulu?) In our guerrilla sector of the book biz, the FAQ are:  Which of these competitors are most useful to us and our customers? What are their distinctive features? How are readers, writers, and publishers utilizing them?

Thus began a nonscientific investigation, whose findings are reported here with the hope that you’ll add your own data.  This week we look at three big competitors in book creation and distribution.  Later we’ll explore book social media, e.g., Twitter and Goodreads. 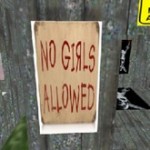 While Amazon defined itself as the universal online marketplace, Apple chose the Secret Clubhouse approach. Want to be in with the In Crowd? Join the iTeam! Apple’s edge is in design, innovation, and quality of products. Where are they focusing their publishing energy? On iBooks Author, the first platform that let anybody with an iPad build a professional-looking full-color illustrated book. Which can be bought and/or enjoyed by anyone else with an iPad. No outsiders allowed.

We at Boom-Books wish Apple would develop Pages. This excellent program lets anybody 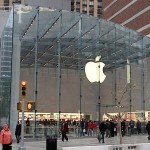 with a Mac easily format a book, and then export it in the semi-universal EPUB format to any e-publishing platform (except Amazon’s Kindle). Coupled with the expert help available at Apple Stores, Pages could be the go-to program for indie and self-publishers. But letting iUsers publish elsewhere would open a gate Apple prefers to keep shut. Yet their own e-publishing arm is not user-friendly. It’s much easier to finagle a book into iTunes (an odd channel for book sales) via an aggregator such as Smashwords than via Apple. 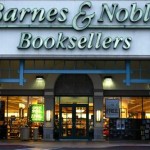 Barnes & Noble hamstrung itself right out of the starting gate by giving each part of its book operation a different (and less than catchy) name. To read a B&N e-book, you need a Nook. To publish a book with B&N, until recently you had to use the inelegantly titled PubIt! The newer Nook mini-tablets actually are fine e-readers, which can be picked up cheap these days since B&N is dropping them. Alas for the company’s future, one of these devices’ best features is their Android operating system and full access to Google, including Google Books and Google Play (also an odd channel for book sales–but more on that another time).

Kobo started as the Canadian Amazon, building its own e-readers and selling books. Now, 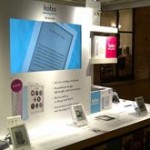 although Japanese-owned, it’s finding a niche as the ally of independent American bookstores in their defensive battle against the giant. An indie bookstore hosts a Kobo kiosk; if a reader opens a Kobo account on the bookshop’s website, the shop gets a percentage of sales to that reader.  Kobo’s newest round of tablets, large and small, claim to be optimized for reading. It’s their stand with the good guys, though, that may be their strongest selling point. Amazon seems to think so: it’s just launched a competing program called Source. So far, indie bookstores are not falling over themselves to sign up. News reports on Source tend to include the phrase “Faustian bargain.”

While Jane Austen dissected English manners and morals, Napoleon of France was busting his bustier in a ferocious campaign to invade Great Britain.  Like a 19th-century Wile E. Coyote, he tried everything: barges, distractions, even balloonists.  Charisse Howard lifts the curtain on those British officers who were forever popping in and out of Austen’s novels:  Where were they going, and why?

Read the fascinating true story of how the British, French, Spanish, Americans, and a band of Louisiana buccaneers crossed swords in a Napoleonic War of the Worlds, on Charisse’s website: “The Regency Abroad: Behind the Scenes of Lady Barbara & the Buccaneer.“ 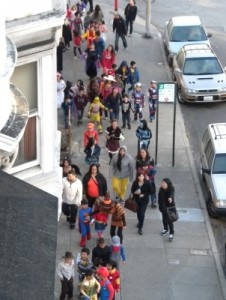 Every year on this date, a sudden murmur outside catches my ear.  It quickly rises to a gabble, rather like the parrots who squawk hysterically when they fly overhead.  It’s the kids in their Halloween costumes!

They walk up the Greenwich Street hill from Stockton to Coit Tower.  When they reach the bottom again, they’ll make a ceremonious circle around Washington Square Park.  Like the Columbus Day Parade, this event has endeared itself to me for its hokey straightforwardness — “We are wonderful and we want to show you!” — plus its diversity.  A Latino Spiderman, a Caucasian Wonder Woman, a Chinese tiger: chattering to each other, sometimes holding hands, the kids show off their rainbow of ethnicities at the same time they’re showing off their costumes.

Over the ten-plus years I worked and hung out with the artist Edward Gorey, he never particularly relished Halloween.  Kids, yes: they charmed him almost as much as cats and dogs did.  To adults he could be courtly and courteous or sardonic or chilly, but to kids he was just plain sweet.  He was also partial to bats and skeletons, more so to mysteries, less so to pumpkins; but not in the same up-close way.

He thought it was bizarre that adults kept linking him to Halloween.  He disliked anyone calling his work macabre.  There was nothing prurient in his curiosity about death. 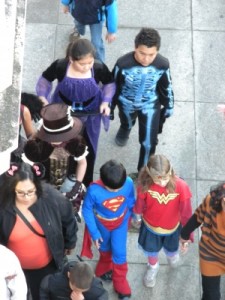 In San Francisco, death, like almost everything, is practically an art form.  Edward only visited this city once that I know of.  He and his friend Connie, who attended Mills College, met on the top floor of the Fairmont (as I recall) one weekend when he was on leave from his Army job in Utah and danced the night away.  (For more on that Army job, which I strongly suspect fostered many of his later interests, including The X-Files, see my book Edward Gorey on Stage…a Multimedia Memoir.)  He had already put down his roots by then in the sandy, stony soil of Cape Cod.  California interested him, as everything interested him, but he had no inclination to travel here (or anywhere).

Still, every year when the kids go by, I think of Edward.  He would have stood on the balcony, as I do, and watched this homespun parade in absorbed fascination.

Then he would have chucked the cat under her chin — “Wuzzum wuzzum!” — and gone back to his drawing board.