As an avid writer and reader of historical romances, I’m attracted to today’s Thoroughly Depressing Word, shared by BK Magazine (the blog of publisher Berrett-Koehler) from the Dictionary of Obscure Sorrows: 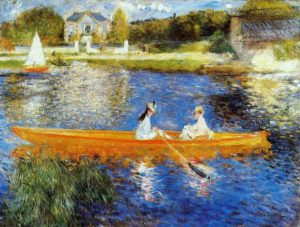 Avenoir (noun)*: The desire that memory could flow backward. We take it for granted that life moves forward. But you move as a rower moves, facing backwards: you can see where you’ve been, but not where you’re going. And your boat is steered by a younger version of you. It’s hard not to wonder what life would be like facing the other way…

I once blurted out a moment of avenoir to a man I loved: How ironic that when an affair ends badly (as ours soon would), you can always look back to the beginning and spot the warning signs. If only time worked differently, what heartache we could avoid! He pointed out that one could equally well look back to the beginning and spot warning signs in an affair that thrives. Only then we don’t see them as warning signs — charming eccentricities, maybe; signals of our distinctiveness, our unique affinity.

The catch to avenoir in real life is that one is not always the rower. Often one is the lucky passenger in the stern, facing forward, looking at the scenery ahead and at the generous friend who’s pulling the oars. 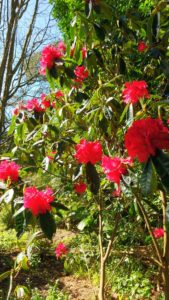 Spring is a season for looking forward, and also for looking around at the miraculous bounty Nature unfurls every year. I recently had the good fortune to visit San Francisco’s Botanical Garden, AKA Strybing Arboretum, which always — every single time — has something new to show me. This particular day was a cornucopia of azaleas and rhododendrons. They’re closely related, and thanks to creative growers, sometimes you can’t tell which is which. 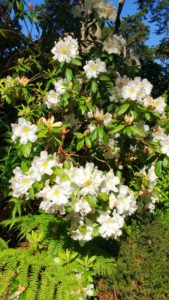 Their frilly skirts remind me of the young ladies who used to stroll through Kew Gardens, my favorite place to wander and goggle on the other side of the world. I imagine how erotically these blossoms must have charged the mood when two lovers (in the old sense of that word) walked together down a path, itching to brush against each other, yearning to be even closer.

Whatever your own romantic situation right now, shake off your avenoir and go visit some flowers. Revel in their beauty, their magical recurrence, and the centuries of feverish appreciation they embody. Picture the variety of ladies’ pelisses and gentlemen’s topcoats that have set a tremulous barrier between skin and skin. Savor the thousands of romances that have been kindled and fueled by the lush flowers of a garden, or the tiny hidden splashes of color along a woodland path — thousands past, and thousands more ahead. Including yours? Is it time to pick a blossom and inhale the rich fragrance of remembrance? Or offer your flower to someone whose company unfurls your soul into radiant bloom? 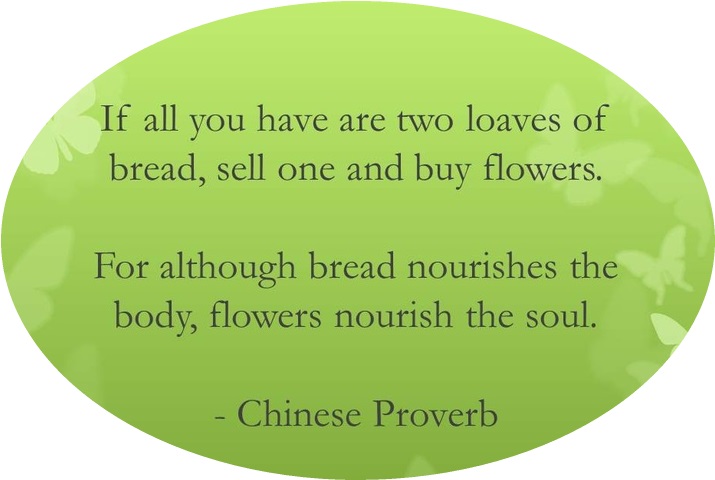 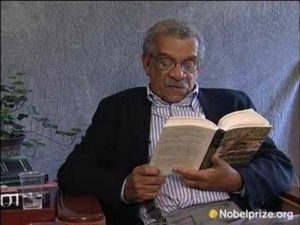 Another great artist died two days before Chuck Berry, at age 87. Poet Derek Walcott won the Nobel Prize for Literature in 1992. He was born on the Caribbean island of St. Lucia, where he got a classic British education, steeped in Odysseus and Julius Caesar, Henry V and Good King Wenceslas. When I met him he’d moved to Boston, teaching poetry and playwriting at Boston University.

Derek Walcott embraced his identity as a Caribbean writer, but when he won a Macarthur Fellowship, he used the award money to build the Boston Playwrights’ Theatre, where B.U. students and alumni could see their work onstage. That’s as crucial to a playwright as keyboards and bass were to J.S. Bach and Chuck Berry.

Whoever wrote the New York Times obituary didn’t seem to know what to make of Derek Walcott: this lyrical lilting Caribbean voice, speaking intricately literate poetry, expressing deep insights about human nature, and also values, in small vivid details of human behavior and the natural landscape. From his poem “Europa” (in his book The Fortunate Traveller):

The full moon is so fierce that I can count the
coconuts’ cross-hatched shade on bungalows,
their white walls raging with insomnia.
The stars leak drop by drop on the tin plates
of the sea almonds, and the jeering clouds
are luminously rumpled as the sheets. 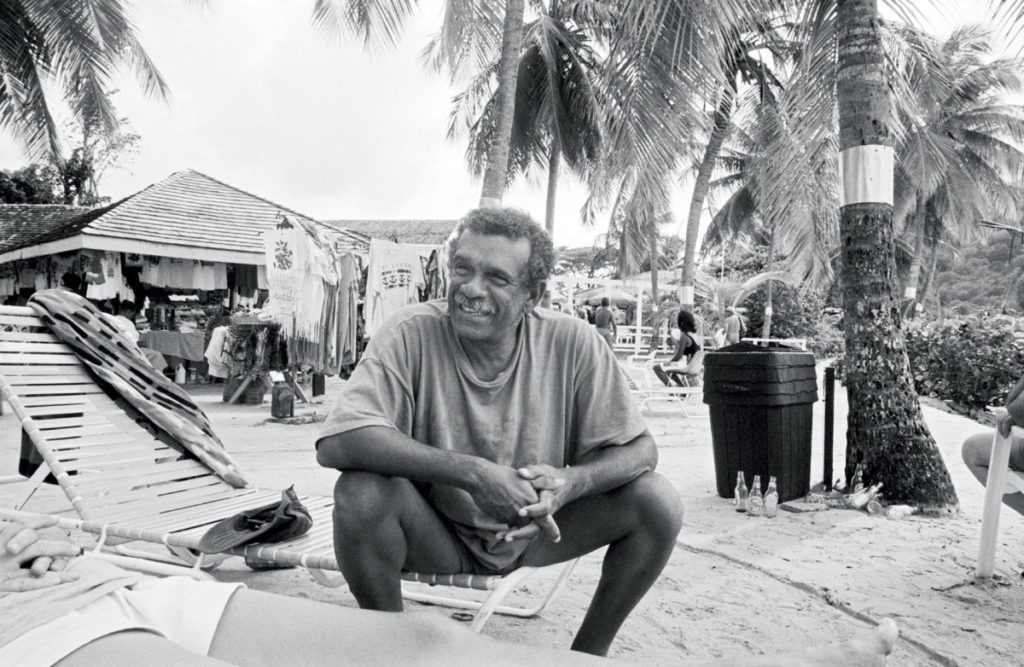 The obituary writer mentioned that Walcott was friends with fellow poets Seamus Heaney and Joseph Brodsky, without apparently appreciating that all three of them were members of an international fellowship of all poets — writers who spent time in the United States, where if you spoke English you could earn money in academia and publishing, but whose home might be Ireland or Russia, Colombia or Peru or Nigeria, and whose vision, curiosity, and reach went way beyond landing a tenure-track job at Harvard.

One of Derek Walcott’s many wonderful short poems is “Love After Love.” A number of famous actors have recorded it, but if you want to hear it as it was written, listen to the reading by Jamaican-born English poet Linton Kwesi Johnson. The central image is how you recover from the pain of unpinning your heart and your identity from another person, and come back to where you can see your own self in the mirror again.

That international fellowship of all poets who met at the U.S. crossroads is mirrored in the musical Hamilton, which I saw just before it opened in San Francisco. Hamilton is a breakthrough on many levels; and one of them is showing us our identity in a mirror, where we can see back into history and sideways into the varied national, racial, cultural, and creedal heritage that is God’s gift to this country. A key line is sung by the diverse immigrants who invented the United States: “Just like my country I’m young scrappy and hungry and I’m not throwin away my shot.” 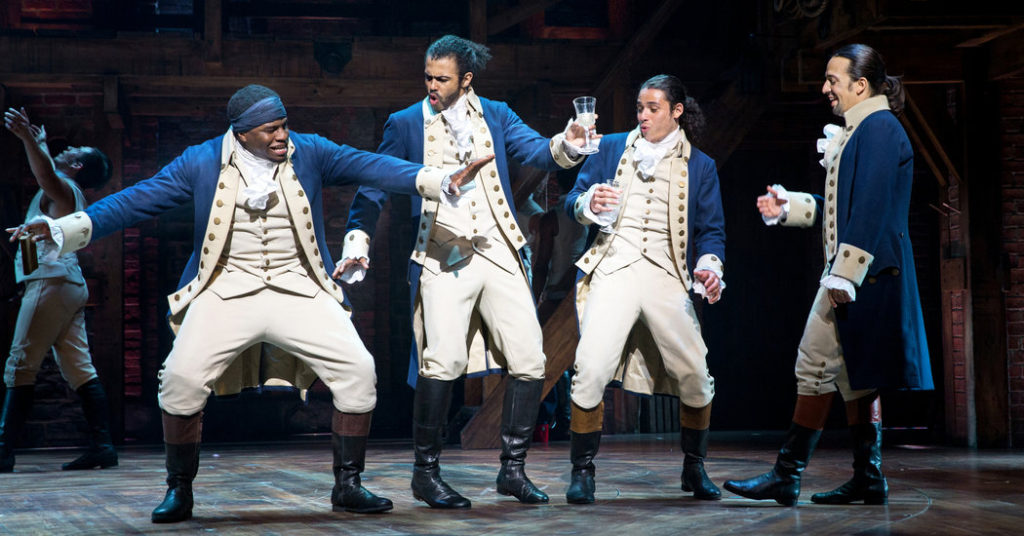 Alexander Hamilton, like Derek Walcott, was born on a Caribbean island. Lin-Manuel Miranda, who wrote the show, was born in New York’s Washington Heights, but his mixed-race family went back often to Puerto Rico. He understands and uses not just the complexity of American history, but the whole range of American music — rap or jazz or pop, depending who’s singing about what. But the real genius of Hamilton is the mirror that Miranda and his gifted young collaborators hold up to those other gifted young collaborators they portray — Hamilton, Jefferson, Washington, the three Schuyler sisters, the Marquis de Lafayette, and a dozen others. Roll over, Beethoven. We belong here too. We are this country. We are your future.