Along with fishermen, this Cape-tip town is a magnet for theatre and other artists, from Susan Glaspell, Eugene O’Neill, and Tennessee Williams to Catharine Huntington, Ray Marten Wells, and Edward Gorey. 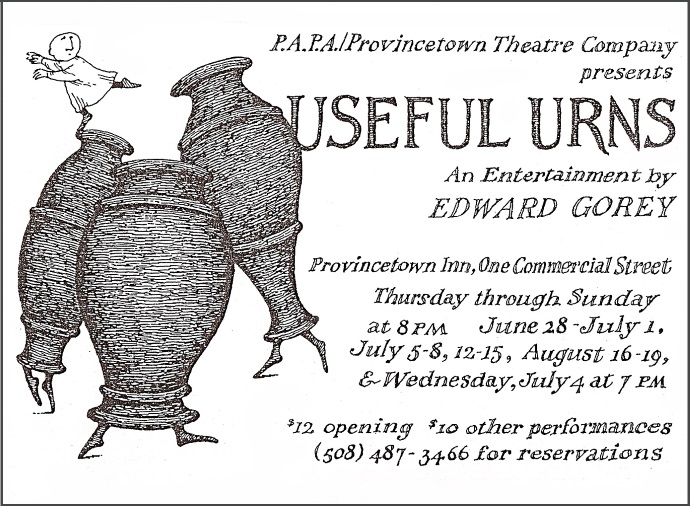 In the summer of 1990, the Provincetown Theatre Company presented the first of three annual “entertainments” written, directed, and designed by Cape Cod artist and author Edward Gorey. Useful Urns was performed by a cast of four women, four men, and assorted hand puppets in a former bowling alley by the sea. Our stage was a small wooden platform; our set was a stationary backboard and six portable giant urns painted on styrofoam slabs. Edward had pieced together a script from his short pieces, some published as books, some written for the stage. As the show’s instigator and producer, and the board president of PAPA [Provincetown Center for the Performing Arts]/PTC, I vowed always to work in theaters where, when things got tense, you could go outside and watch the ocean.

What had brought me and then Edward here from the mid-Cape was the Theatre Workshop. In 1987, artist Ray Marten Wells and aspiring playwright Michael Ferraro decided to boost the town’s tradition of home-grown theater with weekly gatherings of playwrights and directors. I joined at the very first meeting. The directors ran the first half, the writers the second half. Afterwards we’d walk “downtown” for drinks at the Governor Bradford, dinner at Gallerani’s or Napi’s, or beer and chili at Fat Jack’s. 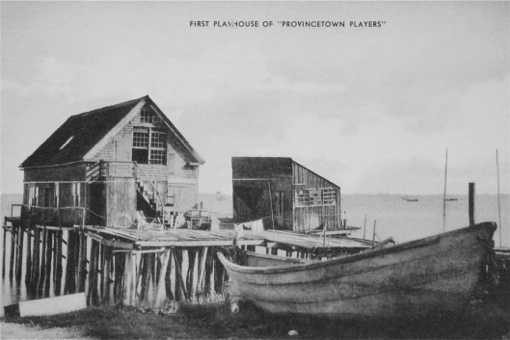 The story was that Ray Wells (who died in 2011 at the age of 103) stayed on when her friend Catharine Huntington and the rest of their Provincetown theater crowd left for Boston or New York. I suspect that what sparked Ray to start our workshop was Huntington’s death (1987, age 100). A longtime champion of Eugene O’Neill’s plays, she had owned and run the Provincetown Playhouse on the Wharf, which replaced the ramshackle home of the town’s previous theatre workshop.

The legendary Provincetown Players “began when a group of writers and artists who were vacationing in Provincetown, MA presented their plays July 15, 1915 on the veranda of Hutchins Hapgood and Neith Boyce’s rented ocean-view cottage. . . . Back in Greenwich Village, New York City, where most of the group lived, [George Cram] Cook stirred up enthusiasm that fall and winter such that an even greater number of writers and artists made their way to Provincetown the next summer of 1916 [including] journalist and poet John Reed, writer Louise Bryant, painter Marsden Hartley, artists William and Marguerite Zorach, the famed “Hobo Poet” Harry Kemp, editor of The Masses Max Eastman, his wife Ida Rauh, Floyd Dell, and Eugene O’Neill.” The first plays O’Neill proposed were rejected, but when they read Bound East for Cardiff, a play set at sea, playwright Susan Glaspell wrote that the group ‘knew what they were for’.”

This being the 100th anniversary of the Players’ seminal summer, the Provincetown Theater is celebrating. Starting on July 2, the present-day company will reprise some of those early plays by Susan Glaspell, Eugene O’Neill, George Cram Cook, and Neith Boyce. Actor and arts commentator Stuard M. Derrick–another immigrant to Provincetown from New York–notes: “The Eugene O’Neill Society and the Susan Glaspell Society are coming . . . and there are panel discussions, galas, and lectures scheduled . . . already gearing up for the big O’Neill centenary next year.” 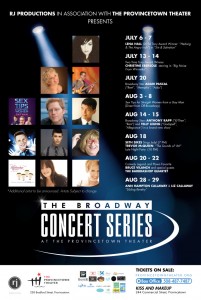 Stuard adds: “Provincetown has really stepped up its game to attract some major celebrities,” including the Broadway @ Town Hall series, hosted by SiriusXM radio’s Seth Rudetsky and featuring stars including Matthew Broderick and Sarah Jessica Parker. “There is also a major Motherwell centennial going on right now . . . But to my mind, and in the opinion of many others who have seen it, undoubtedly one of the best shows of the summer has already opened: the phenomenal Jay Critchley retrospective at the Art Association — it’s just incredible in its scope and brilliantly curated and installed.”

So if you’re going to Cape Cod, be sure to see “From Aesop to Updike,” the 2015 book-cover art show at the Edward Gorey House, and allow plenty of time for the artistic feast in Provincetown. 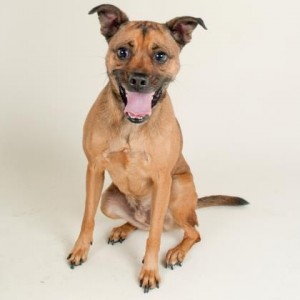 What’s happier than a dog frolicking with his or her favorite person, or a cat cuddling up in your lap?

What’s sadder than a lost or abandoned dog or cat, who’s scared and lonely and can’t understand how s/he fell into this nightmare?

This is such a joyful story–and such a wonderful opportunity for animal lovers–that I couldn’t resist sharing it. The following comes from the website MaddiesFund.org.

Maddie’s® Pet Adoption Days has supported the adoptions of more than 30,000 homeless dogs and cats since the program’s inception in 2010. For each pet adopted, Maddie’s Fund® gives participating shelters from $200 to $2,500. This funding enables the shelters and rescue groups to save and treat more animals throughout the year.

Maddie’s® Pet Adoption Days is a two day pet adoption event honoring the memory of the foundation’s beloved namesake, a Miniature Schnauzer named Maddie. Its purpose is to increase awareness of shelter animals, shed light on the tireless efforts of shelters and rescue organizations, and find new families for homeless dogs and cats.

Maddie’s® Pet Adoption Days started in the San Francisco Bay Area in 2010, where Maddie’s Fund® is headquartered, and expanded to 14 communities in 2014. To date, Maddie’s Fund has awarded $24.7 million to the participating groups which have adopted a total of 31,267 dogs and cats during the past five events. The money given by Maddie’s Fund has enabled shelters and rescue organizations to treat and rehabilitate senior pets and those with medical conditions – animals who likely would have been euthanized otherwise.

Maddie’s® Pet Adoption Days is a collaborative effort of countless people who want to save the lives of shelter animals, a testament to what can be done when people come together and rally for a common cause.

About Maddie’s Fund® and Maddie

Maddie’s Fund was founded in 1994 by Dave Duffield and his wife, Cheryl, with the mission to revolutionize the status and well-being of companion animals. They have endowed the Foundation with more than $300 million. Since then, they have awarded more than $153 million in grants towards increased community lifesaving, shelter medicine education and pet adoptions across the U.S.

The Duffields named Maddie’s Fund after their Miniature Schnauzer, Maddie, who always made them laugh or comforted them during stressful times when Dave was launching a startup software company. Maddie, who passed away in 1997 was the first of 10 dogs plus 7 adopted children who’ve joined Dave and Cheryl’s family over the years.

“Maddie was a dear friend to Cheryl and me, and I promised her that if I ever made any money in my career, we’d give it back to companion animal causes in her honor,” said Duffield. “We’re very proud of the work Maddie’s Fund has done on behalf of Maddie, and we’re thankful to have had the opportunity to keep our promise to her.” 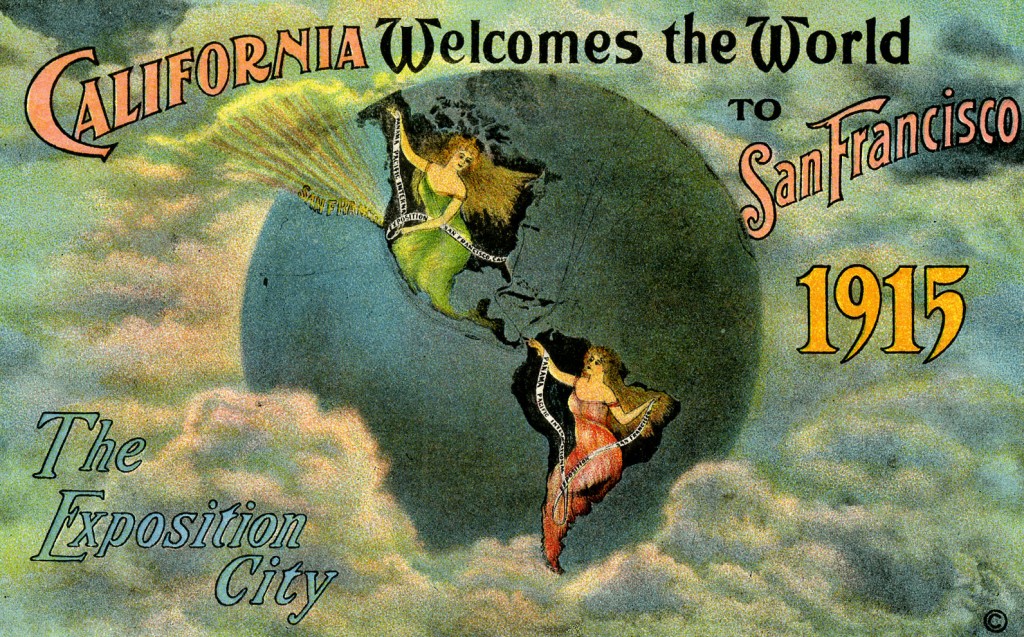 One hundred years ago, San Francisco flaunted its recovery from the devastating 1906 earthquake and fire with the spectacular Panama-Pacific International Exposition. Not only did the city rise phoenix-like from its own ashes, but it transformed its northeastern waterfront into a lavish showcase for new ideas and innovations.

The goals of the fair, which ran from February 20 to December, 1915, transcended any expected economic boost for the city. In the exposition’s official history, published in 1921, San Francisco journalist Frank Morton Todd reflected on a lofty ambition: “to produce in San Francisco a microcosm so nearly complete that if all the world were destroyed except the 635 acres of land within the Exposition gates, the material basis of the life of today could have been reproduced from the exemplifications of the arts, inventions and industries there exhibited.” 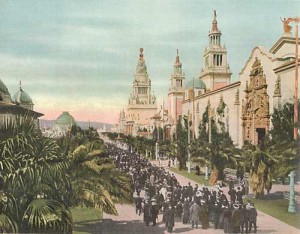 The PPIE was only meant to show off innovations from the past decade. In 1915, this meant that audiences could watch a daring aviator fly stunts (or try a less alarming flight themselves). Laura Ackley, author of The Jewel City, adds: “Visitors could watch the assembly of a pair of Levi’s jeans or a brand new Ford, take in an avant-garde art display or listen to a speech by Teddy Roosevelt. They could see a temple molded entirely from soap or a tiny rosebush made of gems—or butter. When tired of riding around a six-acre replica Grand Canyon or a five-acre model of the Panama Canal, attendees could ascend nearly three hundred feet into the sky in a “house” attached to a steel arm. [They could also spend the night in a replica of Yellowstone’s Old Faithful Inn, or see Blackfoot Indians at the Glacier National Park exhibit.–CV] If the midway did not attract, they could enjoy a daily rotation of bands, parades, pageants, and headlining entertainers, including bandmaster John Philip Sousa, renowned composer Camille Saint-Saëns, and flamboyant dancer La Loïe Fuller.” 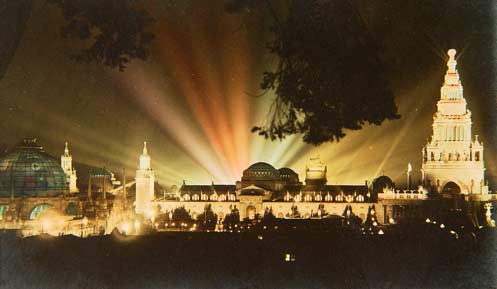 The National Park Service’s PPIE website notes:
“New farming and agricultural technologies were also introduced; Luther Burbank, creator of many new kinds of plants including the Burbank potato, Santa Rosa plum, Shasta daisy, and the fire poppy was in charge of the Horticulture Palace. Author Laura Ingalls Wilder was particularly impressed with new dairy techniques—as she wrote, ‘I saw…cows being milked with a milk machine…it milked them clean and the cows did not object in the least.'”

Shelly Kale continues: “Among its many attractions, the fair boasted the world’s largest wood and steel building (the Palace of Machinery), the largest state building (the California Building), a juried exhibition described as the nation’s best modern art collection (the Palace of Fine Arts), the first transcontinental telephone call (made by Alexander Graham Bell to the fairgrounds before the fair opened), and indirect lighting for outdoor effects used for the first time at an exposition. Complementing the spectacular illuminations were “jewels” of polished crystal and colored glass accentuating architectural features, most visibly on the 43-stories-tall Tower of Jewels, giving the fair its nickname, the Jewel City.” 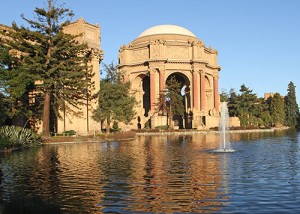 Today the only building remaining from the Panama-Pacific International Exposition is Bernard Maybeck’s Palace of Fine Arts. And San Franciscans still enjoy Crissy Field, the grass airfield created on the site of the PPIE’s automobile track.

There are illuminating activities and exhibits all over the city this year. If you’re here, be sure to see some! My personal favorite is the scale model of a large section of the PPIE brought out of storage and placed on show through December at the California Historical Society, 678 Mission St. 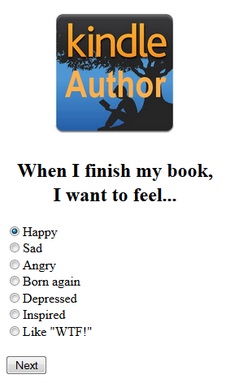 “A customer visits the listing page for a book written by a real author, and Amazon encourages the reader to create and read a free Kindle Author book instead. . . . “Don’t want this book? Build your own for free with Kindle Author!“

For me, the creepiest thing about Coker’s article is that I was less surprised to find out about Kindle Author than I was to find out it’s an April Fool’s joke.

On the other end of the scale, Main Stage West’s current show might sound like an April Fool’s joke, but it’s not:

“Inspired by Michael Pollan’s book, Food Rules, this World Premiere opera theater play takes the audience on a journey from the under-ground world of roots and gophers, to the garden and finally the dinner plate.”

Hand to Mouth closes this coming weekend, so order your tickets now! Main Stage West is offering a special 2-for-1 price: “Just call in and use the secret code: COMPOST.”