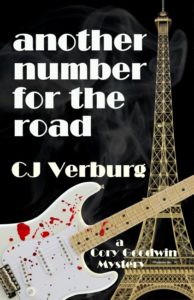 Cordelia Goodwin Thorne had many years of protest activism and rock star groupie antics to keep her from sinking into the paradox of her journo daydreams and her cosmetic charity dinner reality.

She joins the “Magical Mystery Tour” when she learns that The Rind is the mystery band—a group she interviewed for a magazine as a teenager. She aims to rekindle her past admiration for the much-maligned strongman of the band, the appropriately named, Dan Quasi, who, after the brutal murder of his friend and co-band member, Mickey Ascher, takes a runner and hides out for the twenty year hiatus, having lost his wife and his French bit to aforementioned co-band member.

Did this Quasi musician kill his best friend? Or was it the French bit? Or possibly her jilted lover and third band member, also appropriately named, Roach? Or has the mild-mannered Terry, fourth band member, been hiding a violent temper all these years?

The process of discovery is further energized by the author’s experience as a playwright and director. CJ Verburg makes use of the theatrical technique of juxtaposing two scenes on stage at once: flashbacks, backstory, supposition and real time, one upon the other, while skillfully  juggling a cast of characters that would daunt Cecil B. DeMille and D.W. Griffiths.

Another Number for the Road  will satisfy all fans of complex, convoluted whodunits who remember the Sixties with longing and survived the Eighties, Nineties and are in deep with the Twentieth Century.

Author C J (Carol) Verburg lived in Centerville, West Dennis, and Falmouth before settling in Yarmouth Port in the late 1980s. With her friend, neighbor, and fellow mystery fan Edward Gorey, she spent more than a decade writing and directing plays for Cape theater companies from Provincetown to Bourne. Her pivot to crime fiction began with a half-joking “idée du jour” over lunch at their local café. Gorey’s death left that project in Verburg’s hands. The result was Croaked: an Edgar Rowdey Cape Cod Mystery—with a thinly disguised Edward Gorey as a sleuth instead of coauthor. Now Cape artist “Edgar Rowdey” is back to steer the seaside village of Quansett through another disaster in Book Two, Zapped.

C J Verburg’s second mystery series grew out of her dream of traveling to exotic places where she could write novels. Narrator Cory Goodwin is the Boston journalist daughter of legendary New York private eye Archie Goodwin. Silent Night Violent Night finds Cory helping a frightened friend at a science publisher’s posh holiday party. In the brand-new sequel, Another Number for the Road, Cory’s off to Paris on the trail of an unsolved murder and a vanished ‘60s rock band. Another Number for the Road: a Cory Goodwin Mystery is a literary novel for music fans—complete with a live original soundtrack.