Our streets have assumed a more quiet aspect this morning than we have witnessed for several days past. The proceedings of yesterday have very naturally produced such a result.

Execution of James P. Casey and Charles Cora, By The Vigilance Committee, of San Francisco, on Thursday, May 22d, 1856, from the Windows of their Rooms, in Sacramento Street, between Front and Davis Streets. Made by Huestis; sold by M. Ullman, New York. From the Bancroft Library: BANC PIC 1963.002:02–B

The Alta didn’t need to spell out the details. Everyone in the little city of San Francisco (which filled an area roughly from today’s South Beach to Mission to North Beach) knew what “proceedings” had occurred on Thursday, May 22.

While 3000+ armed San Franciscans hanged two human symbols of violence, corruption, and vice, the rest of the city marched toward Lone Mountain Cemetery to bury James King of William, crusading editor of the Evening Bulletin.

Supervisor Casey’s crime was shooting King in the street on May 14 for refusing to retract an insult he printed in the Bulletin. Although King did not appear to be mortally wounded, a surfeit of medical attention soon finished him off. When the Vigilantes took over the County Jail on Broadway and removed Casey to their own “Fort Vigilance” for a kangaroo trial, they also removed gambler Charles Cora, who was awaiting retrial for fatally shooting a U.S. Marshal, arguably in self-defense.

Here is the Bulletin’s account of San Francisco’s transformation in May 1856:

There never was a more perfect or complete revolution in the government, or the affairs of a community, than in this city the past week.Among our citizens confidence is restored, and the virtue, intelligence, and ability of our people to govern themselves. Those who lived in fear of some outrage upon their lives or property feel a security greater than they have experienced in a long time.

We had witnessed the bold attempt at assassination in our streets; we had seen the infuriated mass rush wildly after the prisoner, with exclamations of “Hang him!” filling the air.

But never until the death of Mr. King was announced yesterday [May 20], at half past one o’clock, have we seen such a powerful and universal demonstration of real, true, heartfelt sorrow and mourning as was exhibited by our people.

On Thursday morning, many of our business and private dwelling houses, that had not previously robed in black, put on the garb of mourning, and the flags of the city, with but one exception—Engine Company Number Ten—hung at half mast. At an early hour, the meetings and organizations of our different societies took place; and by twelve o’clock, all were ready to join in the procession.

The body of the deceased had been conveyed to his late residence at the corner of Pacific and Mason Streets. A few minutes before noon, the hearse was borne to the Unitarian Church on Stockton Street. The church was well filled long before the hour appointed. Mrs. King and children and Mr. Thomas S. King [the deceased’s younger brother] were seated in front of the pulpit, and the immediate friends of the deceased in the adjoining pews.

The cortege moved in the following order:

Attaches of the Evening Bulletin on foot. California Pioneers with badges and mourning emblems. Members of the press in the city and towns in the interior. Sacramento Guard in full uniform. The San Francisco Fire Department in citizens’ dress, headed by the chief engineer. Every company was largely represented except Number Ten.

The San Francisco Minstrels, members of the theatrical profession, and the musical bands of the city with muffled instruments. The boys from St. Mary’s Library Association. The draymen of the city on horseback, to the number of 350 men. The steveodores, with banners, numbering 142 men. The Turnverein Society in full costume. A deputation of 10 colored persons with badges representing the San Francisco Athenaeum, a library association composed of colored persons. These were followed by a large number of carriages and private vehicles. It is estimated that the procession extended a mile and a half in length.

The tragic martyrdom of a hero was just the story San Franciscans needed to excuse themselves for taking the law into their own hands and lynching two scapegoats. It also got them off the hook for not utilizing the legal system already in place. If any Vigilantes felt guilty for leaving the job of cleaning up their city to James King of William while he lived, they could pat themselves on the back for doing a zealous job of avenging his death.

But in reality there was more to the story than that. When we come back, a 160th-anniversary look at some startling twists behind the purification of San Francisco. 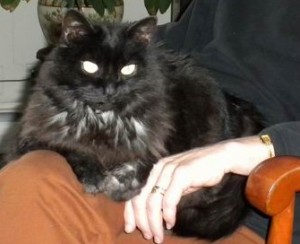 I picked my late cat Grusha because she was born on Cape Cod right around the time my friend and neighbor Edward Gorey died. If souls do by any chance migrate, I figured he’d come back as a cat — most likely a delicately etched black-and-white one. 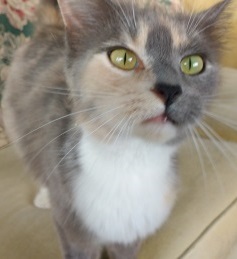 Edward embraced all cats. I wish he could share the pleasure of getting to know my new one, Roo. Her harlequin coloring and sweet disposition are happy reminders of every cat who’s shared my home over the years . . . and Edward’s home, too: her nose is George, her bib is Weedon, her face is half Alice and half Thomas, and her back is a pastel Jane. Those are the five cats Edward was down to by the end of his life, each with a plain English name for daily use, and a secret Japanese name from his favorite book, The Tale of Genji. 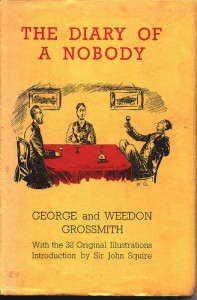 (George and Weedon Grossmith, among their many talents and enterprises, wrote the comic English novel The Diary of a Nobody. Hugh Bonneville, lately famous as Lord Grantham of Downton Abbey, proved his thespian chops years earlier by starring in a mesmerizing film of that unfilmable book. George Grossmith also pops up in the Gilbert & Sullivan biopic Topsy-Turvy.)

Now an innovative thespian troupe in New York has staged a play written and directed by Travis Russ, in which three actors play Edward Gorey in a life imagined by Russ from his own life plus a lot of reading and mulling. It’s called Gorey: The Secret Lives of Edward Gorey, and it’s playing at HERE, 145 Avenue of the Americas, through May 22. Reviews are strong enough that those of us who can’t make it to Manhattan this month may get another shot.

Meanwhile, anyone curious about Edward’s real life in the theater can still read/see/hear the whole story in my print and e-book Edward Gorey On Stage. One of my enterprises for this summer is creating an updated edition and adapting the book specifically for iPad.

The Agatha Christie mystery Edward and I once talked about setting at our friend Jack’s breakfast-and-lunch cafe, Jack’s Out Back, became Croaked: an Edgar Rowdey Cape Cod Mystery (also available in print and e- form). Its sequel, Zapped, is in the labyrinthine publishing pipeline. While I’m waiting, I’ve started a novella . . . peering (as I type) over the furry helper who’s exploring my keyboard to assert her proper place as center of human attention. 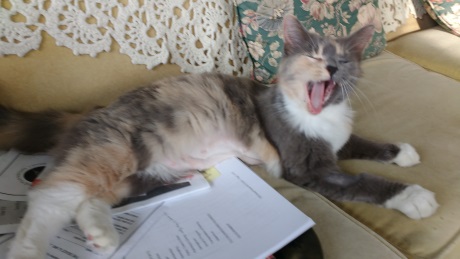