Coming up this week are three remarkable book-focused events.

On Wednesday, Feb. 26, the Mechanics’ Institute presents “The Inside Scoop on Book Promotion.”  In a rare appearance on the stage instead of behind it, MI Events Director Laura Sheppard will reveal how she (and others who book author appearances) decides who’ll fill her few coveted presentation spots. Professional publicist Isabella Michon will further illuminate the challenge of winning media attention for one’s books. This special open-to-the-public meeting of MI’s biweekly 5:30 PM Indie Publishers’ Working Group promises to be a don’t-miss event for every writer and/or publisher who’s reached the end of his/her Twitter-Facebook-Reddit-Pinterest-Vine-YouTube tether.

In the digital age, it was only a matter of time until that popular phenomenon the writers’ conference went virtual. IndieReCon (“making indie-publishing a mission possible”) offers a slate of online speakers and panels this coming Tuesday through Thursday on topics from “How to Write Fast” to “Getting Started on Goodreads.” Highlight speakers include Indie-revolution pillars Joe Konrath and Barry Eisler (12 to 2 PM Tuesday), C.S. Lakin, Joel Friedlander, Mark Lefebvre, Joanna Penn, and David Gaughran.

The evening was a blur at Edward Gorey’s 89th birthday party at the Cartoon Art Museum on Thursday, celebrated by the guest of honor in absentia owing to his decease 14 years ago. The slideshow didn’t function, but Fantod readings reliably predicted gloom all around. As Yerba Buena Third Thursday art fans drifted hither and yon, tea and wine flowed, and lovely macaroons and madeleines became food for memory, I read “The Osbick Bird,” which also was read by Julie Harris, the late actress and FOE (friend of Edward’s), at his 2000 memorial party in Yarmouth Port. For more, read Edward Gorey On Stage: a Multimedia Memoir. 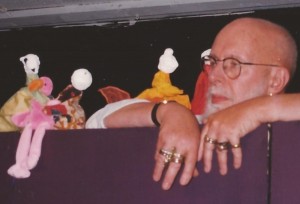 Edward Gorey visited San Francisco only once, on a R&R break from his tour of duty in the U.S. Army during World War II. Since his death in 2000, the City of Love’s embrace of this brilliant Chicago ->Boston ->New York ->Cape Cod artist and author only seems to grow warmer.

It was in 2000 that the Edwardian Ball was launched. This increasingly legendary Steampunk celebration has mushroomed in 14 years from a fringe event into a multi-floor two-day festival, a bizarre Beaux-Arts bazaar of vendors, music, vendors, performances, vendors, acrobatics, dancing, and above all, costumes displaying every imaginable variation on Edwardian and Victorian, Goreyesque and Goth. 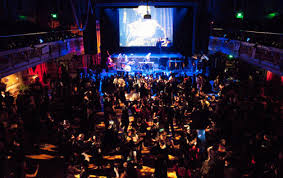 2000 also marked the first birthday party for Edward Gorey at the Cartoon Art Museum. I had hosted parties for Edward, who generally loathed and avoided them, on Cape Cod during the late 1990s when we were collaborating on theater projects. He strongly urged me not to fly back East for his 75th birthday, so instead, I got together with CAM to stage a sampler performance of some of his theater pieces, plus a giant cake. I sent him photos, not suspecting that less than two months later he would die from a heart attack. 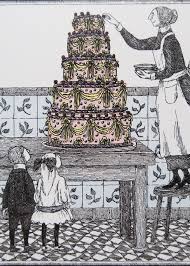 This year Edward Gorey’s birthday–February 22–falls on a Saturday. CAM’s celebration, two days earlier, will be part of Yerba Buena Third Thursdays, a monthly evening of open museums and galleries in the area around Yerba Buena Park. If you’re in downtown San Francisco on Thursday night 2/20, drop by 655 Mission Street anytime between 5 and 8 PM to peruse the current exhibitions, watch a slide show, have your Fantods read, or buy a book written, illustrated, and/or inspired by Edward Gorey.

If you’re on Cape Cod in March, you can catch any of three preview screenings of clips from Christopher Seufert’s affectionate documentary film of Edward Gorey’s life and work in the late 1990s.  Edward and Chris met when our town of Yarmouth opened a local-access TV station, C3TV. 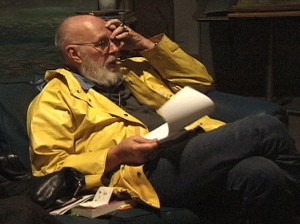 Eternally curious and experimental, Edward (and I) signed up to learn how to use this new medium; Chris was the resident expert. TV animation wound up not being a medium Edward chose to pursue, but Chris was fascinated by the media he did pursue, and pursued him. Over Edward’s theatrical groans of protest, Chris and company followed him everywhere with cameras rolling. For the price of some inconvenience (along with plenty of admiration), the legacy to which Edward paid no particular attention during his life is now bolstered by footage. 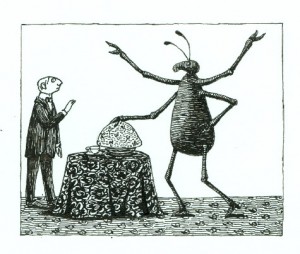 Wherever you are on February 22, take a moment to look closely at one of Edward Gorey’s extraordinarily intricate and beautiful drawings; read one of his startlingly simple but unsettling books. And don’t forget George Washington. This day has given us plenty to celebrate.

Edward St. John Gorey (1925–2000) is famous for the bounty of books he wrote and illustrated, featuring his distinctive humor and astonishingly detailed crosshatch ink drawings. Gorey was also a playwright, a Tony award-winning costume and set designer (for the Broadway production of Dracula), and the creator of the animated introduction to the PBS series Mystery! 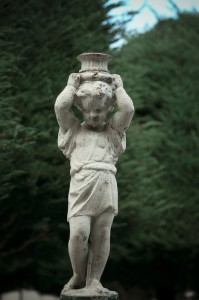 Almost every time someone famous dies unexpectedly, someone else labels that death a tragedy.  Philip Seymour Hoffman’s death last Saturday night was a tragedy, in the Greek sense: not just unexpected, but perversely made inevitable by his own choices.  Among other things, it has unleashed a good deal of muttering about “that deep dark lonely place” which is said–usually by non-artists–to be the wellspring of creativity.

The deep dark lonely place popped up again at a recent online publishing hangout.  The speaker was talking of the “community” of writers from which 21st-century books emerge.  In contrast to what I used to call the John School, i.e., the postwar literary circle comprising successful writers from Barth and Cheever to O’Hara and Updike, the present school is school-less.  The Johns gave us shelves full of novels about sex, love, competition, and alienation in academia, because academia was where they lived–a prime source of their income, prestige, and visibility.

Just as the internet has shaken publishing companies out of their old niche, it has shaken out the academic community of writers.

Of course, “community” is used nowadays to mean any diverse group which the speaker wishes to treat as if it were monolithic: the gay community, the black community, the  community of nations.  Somewhere a pundit is probably commentating even now about the Facebook community, the Twitter community, the Pinterest or Reddit or Wattpad community. 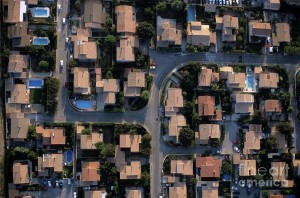 Just as the real-estate community redefined the word “home” to mean what used to be called a house, the word “community” is wielded as a kind of demographic comfort food.  In our hearts, we all want a home.  We all want to belong to a community.  Our need for achievement seesaws with our need for affiliation.

Think of any online group you’re active in.  How community-like does it feel to you?  Would these folks invite you over for a cup of coffee?  Drive you to the hospital in an emergency?  If the NSA (which sees all and knows all) accused one of them of a crime–say, murder or terrorism–would you leap to his/her defense?

When an actor performs in a play, he places himself in the hands of the other actors onstage.  Like a trapeze artist, he trusts that when he jumps, he won’t fall to his death; someone will catch him.  That is the place where art comes from.  Call it community; call it home.  It is not deep, dark, and lonely.  Art happens in the safe place where you are free to do your best work. 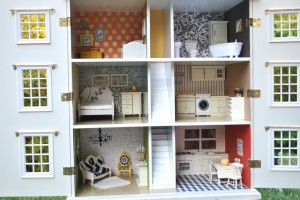 When I write, the fictional characters I create become a community.  I know I’m inventing it, the same way I used to invent a family for my dolls.  Still, whether I’m writing a play or a novel, I’m in a place that gives me immense emotional satisfaction (punctuated with hair-tearing frustration) as long as I’m fully immersed.  Coming out is a jolt:  What’s all this, then?

Years ago I taped up a twisted Beatles line over my typewriter:  When I write, everything seems to be home.

Why does writing, or performing or directing, or painting, or designing a book cover, feel like home?  I don’t know for sure.  I know that, like my dollhouse, this mini-world is more manageable than the big one outside.  The people in it may be charming, irritating, or frightening; they’re rarely boring.  And although they are full of surprises and demands, they never seriously threaten me.  Here, I’m the NSA: I see all and know all.