At last! In my e-mailbox this morning came an announcement I’ve been waiting for since November. (Three announcements, in fact.) Not, as I’d expected: “Kindle Scout’s First Books Published by Kindle Press.” Instead it was “Your free copy of X is now available.”

X = a title in the mystery/suspense/thriller category which I nominated for publication last fall. As I’ve described in past posts, the premise of the Kindle Scout program is that readers become literary agents, in effect, by reading excerpts from a hundred or so candidates on the website (in three categories: romance, mystery, and sci-fi) and voting on their favorites. I’ve voted for maybe a dozen books, and more than half have won the brass ring: a $1500 advance, with publication by Kindle Press and publicity by Amazon.

Offering me a free copy of each of my nominees rather than heralding its launch suggests two things:

There’s a bit of smoke-and-mirrors throughout the Kindle Scout process–inevitable with a brand-new book-publishing model. I’ve heard through the grapevine that although every aspiring candidate must submit a complete, polished e-book, fully copyedited and designed, those candidates that make the final cut are being heavily tweaked before publication. (That hypothesis is supported by the distinct drop in quality I’ve noticed in recent Scout website contenders.) When I clicked onto Amazon to claim my copy of L.A. Sniper (see L, above), a note popped up:

Just so you know…This view is of the Kindle edition (2014) from Steve Gannon. The Kindle Edition edition (2015) from Kindle Press that you originally viewed is the one you’ll receive if you click “Pre-Order” on the left.

My “free book” email began with Congratulations! and ended with Three cheers for reader-powered publishing! This too is less than transparent. As consumerist.com summarizes:

The process isn’t that different from the way Amazon selects which original shows to produce for its Prime streaming service. In that instance, viewers are given access to pilot episodes for a slate of contenders and then asked to vote on the ones they would like to see continue as full-fledged shows….
Although [Kindle Scout] gives readers the feeling that they are making the choice in who gets published and who doesn’t, Amazon ultimately holds all the decision-making power. At the end of the 30-day reader voting period, the Kindle Scout team reviews the books with the most votes and determines which three [sic] will be published.

Of course, the proof of the pudding is in the eating, as the old and often truncated saying goes. As TechCrunch notes:

March 3 should provide a better sense of how well the program is working in terms of actually highlighting quality content – the value of a crowdsourced publishing program only exists insofar as it can pick winners better than traditional systems, or generate better reception that straight-up self publishing.

Meanwhile, CONGRATULATIONS AND BEST WISHES to the first round of winners of publishing contracts from Kindle Press! 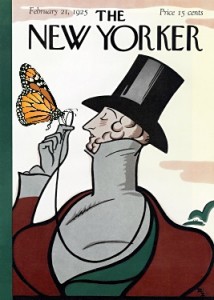 If the artist and writer Edward Gorey were still alive in the conventional sense, he’d be turning ninety on February 22. He was born one day after The New Yorker magazine (and its iconic dandy, Eustace Tilley). Agatha Christie would turn 35 in September; Hercule Poirot had been detecting for five years, and Miss Marple debuted two years later. Let us observe a moment of awed silence in honor of 1925.

A lifelong animal lover, Edward Gorey left the bulk of his estate to help creatures in distress. Exactly which creatures, his Charitable Trust was directed to decide. Among the few organizations specifically mentioned in his will was the Xerces Society for Invertebrate Conservation. 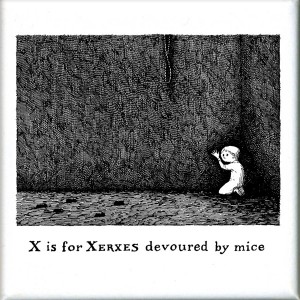 The Xerces Society? Invertebrate conservation? Most of Edward’s friends knew “X is for Xerxes devoured by mice” from The Gashlycrumb Tinies. But . . . what was he proposing? Stop stamping out garden slugs? Rescue the escargots?

I’d forgotten about Edward’s unusual bequest until Barbara Kingsolver’s novel Flight Behavior spurred me to investigate the plight of monarch butterflies. An announcement this week from the U.S. Fish and Wildlife Service summarizes the problem: “While monarchs are found across the United States—as recently as 1996 numbering some 1 billion—their numbers have declined by approximately 90 percent in recent years, a result of numerous threats, particularly loss of habitat due to agricultural practices, development, and cropland conversion. Degradation of wintering habitat in Mexico and California has also had a negative impact on the species.”

Monarch butterflies are astonishing. Every year they fly from their summer habitat all over the United States to a particular part of Mexico. Their lifespan is shorter than the journey, so no one butterfly ever makes the whole trip. They reproduce along the way, running a multigenerational relay race across two hemispheres.

“On August 26, 2014, The Center for Biological Diversity and Center for Food Safety as co-lead petitioners joined by the Xerces Society (a nonprofit organization that protects wildlife through the conservation of invertebrates and their habitat), and renowned monarch scientist Dr. Lincoln Brower, filed a legal petition to the U.S. Fish and Wildlife Service seeking Endangered Species Act protection for monarch butterflies.” —Jean Bartlett, San Jose Mercury News

One step that we the people can take to help save the beleaguered butterflies is to replant milkweed—”the monarch’s exclusive larval host plant and a critical food source . . . which has been eradicated or severely degraded in many areas across the United States in recent years.” Since milkweed is a roadside weed, it’s on the front line when highway verges are sprayed and mowed to keep down bugs and brush. Planting the wrong species, or seeds from plants exposed to pesticides, can be lethal to the butterflies, so we’re requested to use only reliable seeds.

Where do we get reliable milkweed seeds? Use the Xerces Society Milkweed Seed Finder! 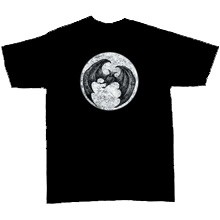 Gorey fans will be pleased to know that Edward’s will also directs his Charitable Trust to help bats. If you want to help stamp out White-Nose Syndrome, protect the Paraguana Moustached Bat, or build your very own bat cave, you can join groups such as Bat Conservation International in utilizing the fruits of Edward’s affection for these winged creatures.

And if you want to fly around in your own glow-in-the-dark bat T-shirt, it’s waiting for you at The Gorey Store.