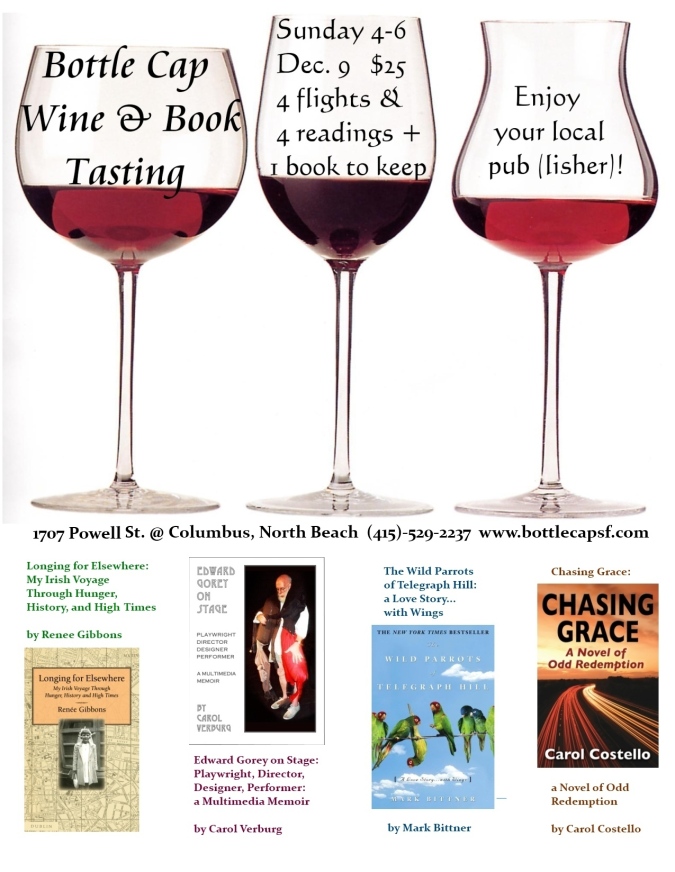 Determined to exist in time for the holidays, the print version of Edward Gorey On Stag

e: Playwright, Director, Designer, Performer: a Multimedia Memoir continues to inch toward publication.  Over the past week this valiant little volume has fought off attacks of spontaneous indentation, skewed colors, and other slings and arrows of outrageous fortune that tree-flesh is heir to.  Each new setback only renews its fervor to leap into shiny new covers, thence into wrapping paper and ribbon, thence onto a hidden shelf, down a stocking, or under a tree, to emerge at last into the delighted hands of a Gorey fan.

You can help make this unique mini-biography’s dream come true!  Official publication date is November 29, and like the Fiscal Cliff it’s still . . . well, a cliffhanger.  Stay tuned!  And join us to celebrate Victory (fingers Xd) on Sunday afternoon, Dec. 9, 4-6 PM at the Bottle Cap, opposite North Beach’s Washington Square Park, where four fascinating books will be matched with four delicious wines at a fabulous Wine and Book Tasting.

When we left Jonah Lehrer (see my post of  July 31), his career was in flames, torched by the revelation that he’d made up quotations from Bob Dylan, as well as “repurposed” large chunks of writing previously published elsewhere, for his book Imagine.

I recently started reading Imagine, and was so put off by its glib storytelling, with facts inserted mainly for illustration, and grand generalizations often drawn from a single anecdote, that I quit after a few chapters.  That led me to wonder how such a shallow excuse for a book ever got into print.  My neighbor and fellow editor Susan Weisberg discovered that New York magazine wondered the same thing, and published an illuminating answer by Boris Kachka just a few days ago: “Proust Wasn’t a Neuroscientist. Neither was Jonah Lehrer.”

It’s long, but if you’re at all involved with journalism, literature, and/or science, it’s well worth reading!  Kachka presents quite a few lessons to be drawn from the Icarus tale of Jonah Lehrer, including one that’s particularly relevant to authors and publishers:

The tradition of the author’s lecture tour goes back at least as far as Charles Dickens. But its latest incarnation began with [Malcolm] Gladwell in 2000. The Tipping Point, his breakthrough best seller, didn’t sell itself. His publisher, Little, Brown, promoted the book by testing out its theory—that small ideas become blockbusters through social networks. Gladwell was sent across the country not just to promote his book but to lecture to booksellers about the secrets of viral-marketing. Soon The New Yorker was dispatching him to speak before advertisers, charming them and implicitly promoting the magazine’s brand along with his own. Increasingly, he became a commodity in his own right, not just touring a book (which authors do for free) but giving “expert” presentations to professional groups who pay very well—usually five figures per talk.

Sometimes we writers and publishers need to remind ourselves that this century is a different ball game from the one before, and we can profit from applying some of our creative curiosity to the new opportunities it offers.  And sometimes we need to remind ourselves why we chose this vocation, and refuse to be bullied by the lure of fortune and fame into compromising the search for knowledge that’s at the core of our quest.