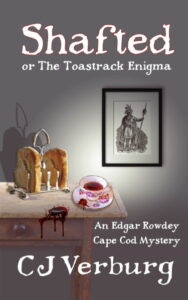 New from Boom-Books!
Shafted, or The Toastrack Enigma: an Edgar Rowdey Cape Cod Mystery (#3)
400 years after the “First Thanksgiving,” a lunch for leaders of GreenHome LLC and the Wampanoag tribe ends in murder.

Stopping at a yard sale on the way to lunch at Leo’s Back End, Harriet Benbow beats out two friends to buy an Art Deco toastrack. The next morning she’s found dead. Payback? A burglary gone wrong? A violent protest against her plan to build luxury condos on an indigenous burial ground? Detective Pete Altman wonders: Why did the killer cut up her scalp? Back End soup-chef Lydia Vivaldi and Wampanoag pastry chef Mudge Miles wonder: Is somebody trying to frame the Indians? Reclusive genius Edgar Rowdey, who’d rather be plotting his own mystery for Golden Age magazine, wonders: Where does the toastrack fit in? 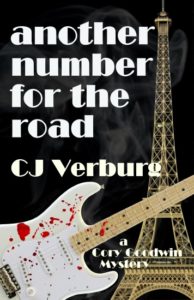 Another Number for the Road: a Cory Goodwin Mystery
(The first literary mystery for rock-&-roll fans — with live music!)
Is Boston’s #1 rock-protest hero offering Cory a scoop or covering up a murder?

As a journalist, and the daughter of a private detective, Cory responds to her crumbling marriage by hopping on a plane. Twenty years ago, Rind vocalist Mickey Ascher was brutally murdered in his Boston penthouse. Now his long-vanished guitarist, Dan Quasi, is launching a new band in Paris. Cory’s search for lost time takes her from a DC antiwar march to a mountaintop in Tennessee, EuroDisney, the Eiffel Tower, and a village strawberry festival. But when the musical mystery tour turns deadly, she can’t escape her father’s question: Who killed Mickey Ascher?

“The music is exhilarating, the romance is hot, and the mystery is challenging.” — AF, Amazon
“A fast-paced, smoothly written, and enjoyable journey. . . . Highly recommended!” — P, Amazon

$14.99 print at your local bookstore, Bookshop.org, or any online retailer
$4.99 e-book at Amazon/Kindle, iTunes, Google Play, Kobo, and more 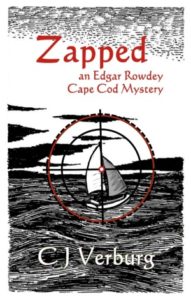 Zapped: an Edgar Rowdey Cape Cod Mystery (#2)
Just when you thought it was safe to go back in the water . . .

A posh seaside lawn party. To Cape Cod inventor Pam Nash, it’s the ideal launch for Zappa, her new “Taser for pacifists.” To her daughter Ashley, it’s the ideal way to turn 21. For ex Fix-It Chick Lydia Vivaldi and Wampanoag dessert chef Mudge Miles, it’s a catering job they can’t refuse. But when they learn Ashley’s fled home from a stalker in Las Vegas, and a dead reveler is found floating near the Nashes’ dock, it’s time for local artist, author, and eccentric genius Edgar Rowdey to turn sleuth.

“A must for fans of the ‘smart cozy’’. . . a wonderful cast of characters I hope to meet again soon.” — SJM, Amazon

$14.99 print at your local bookstore, Amazon, or any online retailer
$4.99 e-book at Kindle, iTunes/Apple Books, Google Play, Kobo, and more

look inside this book
Croaked: an Ed 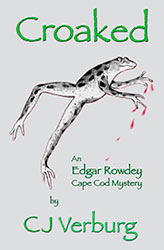 Is the charming seaside town of Quansett a sanctuary or a death trap? When her ex-partner in The Fix-It Chix is killed during a film shoot, urban refugee Lydia Vivaldi doesn’t believe the official verdict of accident. It takes a village to find out what really happened — led by reclusive artist Edgar Rowdey. 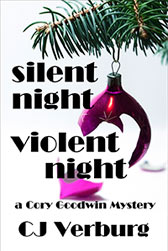 A publisher’s Christmas party. A blizzard. Rival scientists. Secret romances. Murder. Cory’s reunion with an old college friend and comrade-in-arts turns into a nightmare when snow strands the guests. She’ll need all her skills as a Boston journalist — and the daughter of a Manhattan private detective — to stop this ruthless killer.

“Captures you from the first sentence and keeps you hooked until the last period. . . . All the clues are there, but it still keeps you guessing!” –KF, Amazon
> More Reviews

print $14.99  at your local bookstore, Bookshop.org, Amazon, or any online retailer
e-book $4.99 on Kindle, Smashwords, Nook (Barnes & Noble), Scribd, and other e-sellers 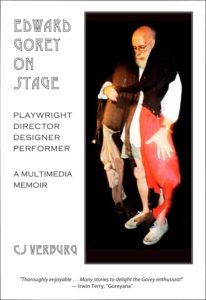 From his boyhood in Chicago, he was fascinated by theater. Once he got out of the Army, Edward Gorey launched half a century of artistic escapades onstage and backstage. This full-color print and e-book is full of rare drawings and photos, behind-the-scenes stories, excerpts from scripts and reviews, music, video, and website links.

“A joy to read… I especially liked the multimedia links… A must have for fans of Gorey’s work [and] a great read for anyone interested in the performing arts.” —PM, Amazon > More Reviews 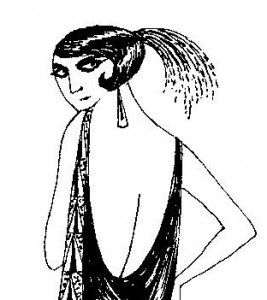 San Francisco writer CJ Verburg is best known as a playwright and theater director, and for her best-selling books including Ourselves Among Others and The Environmental Predicament (as Carol J. Verburg). For her specialties and background as an editor, see her LinkedIn profile. 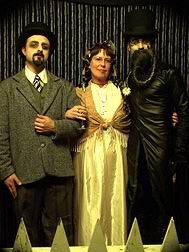 A friend and neighbor of the late artist and author Edward Gorey, CJ produced twenty-odd of his original theatrical pieces on Cape Cod. Edward Gorey On Stage is her multimedia memoir about their adventures. Croaked: an Edgar Rowdey Cape Cod Mystery started as one of their frequent idées du jour over lunch, and morphed after his death into an affectionate tribute. Its anagrammatically eponymous sleuth and his small-town comrades reappear in Zapped: an Edgar Rowdey Cape Cod Mystery. CJ’s other mystery series follows Cory Goodwin, the Boston journalist daughter of NY detective Archie Goodwin, as she tracks an ex-rock star around France (Another Number for the Road) and delves into the noir side of science publishing (Silent Night Violent Night).

Spin, or Twilight of the Bohemians was a winner of Ashland New Plays Festival (October 2011) and Centenary Stage Company’s Women Playwrights Series (April 2012).  When Pulitzer laureate Jerome Hart drops dead onstage, what will become of his Cape Cod farmhouse, his five cats, and his unofficial lifelong partner, Mimi Locke?  Read about Spin and the ANPF in the Ashland Daily Tidings.