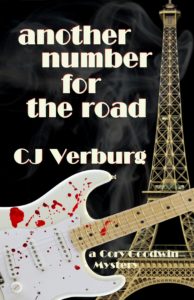 It’s been 20+ years since Cory Goodwin broke into journalism by interviewing Mickey Ascher and Dan Quasi of The Rind at an antiwar march in DC. Mickey’s long dead, bludgeoned with a champagne bottle after a party in his Back Bay penthouse. The Rind broke up. Dan — murder suspect #1 — disappeared. Cory swung a summer assignment in Paris and came home married. Now she’s teaching school, separated, wondering what the hell she’s doing . . . until her old editor at Phases offers her a gig in Paris covering a Mystery Band.

What the hell is he doing? Is Boston’s onetime rock-protest hero really playing for an upscale networking program? Why would Dan and the other Rind survivors pick the Eiffel Tower, EuroDisney, and a village strawberry festival for their long-awaited comeback?

And what does this trip have to do with Mickey Ascher’s murder?

CJ Verburg’s brand-new Cory Goodwin mystery Another Number for the Road will whirl you back to the best of times and the worst of times: music, love, and flowers / drugs, sex, and violence. The leitmotif is music. This jukebox novel overflows with familiar songs and new ones, including some you can listen to with a click — interspersed with T.S. Eliot, Wallace Stevens, and sneak peeks at a rock opera in Fantasyland.

Get it while you can!