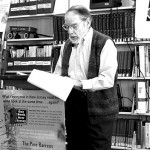 So much current advice to authors takes the form of “Ten Ways to Ruin Your Book Launch” or “How to Blog Your Way to Discoverability” that we were pleased to rediscover these practical yet profound observations by a writer who’s achieved success because of, not in spite of, his high artistic standards. 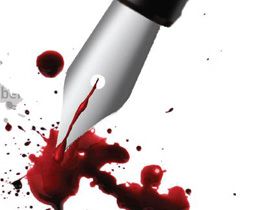 and develop clumsily, because every sentence affects not only those before it but also those that follow. . . . The way to do a piece of writing is three or four times over, never once. For me, the hardest part comes first, getting something–anything–out in front of me. Sometimes in a nervous frenzy I just fling words as if I were flinging mud at a wall. Blurt out, heave out, babble out something–anything–as a first draft. With that, you have achieved a sort of nucleus. Then, as you work it over and alter it, you begin to shape sentences that score higher with the ear and eye. Edit it again–top to bottom. . . . All that takes time. . . . 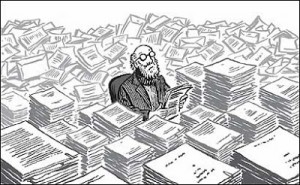 “It is toward the end of the second draft, if I’m lucky, when the feeling comes over me that I have something I want to show to other people, something that seems to be working and is not going to go away. The feeling is more than welcome, yes, but it is hardly euphoria. It’s just a new lease on life, a sense that I’m going to survive until the middle of next month. After reading the second draft aloud, and going through the piece for the third time (removing the tin horns and radio static that I heard while reading), I enclose things in boxes for Draft No. 4. If I enjoy anything in this process it is Draft No. 4. I go searching for replacements for the words in the boxes. The final adjustments may be small-scale, but they are large to me, and I love addressing them. . . . 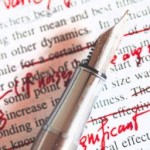 “You draw a box not only around any word that does not seem quite right but also around words that fulfill their assignment but seem to present an opportunity. While the word inside the box may be perfectly O.K., there is likely to be an even better word for this situation, a word right smack on the button, and why don’t you try to find such a word? . . . If there’s a box around ‘sensitive,’ because it seems pretentious in the context, try ‘susceptible.’ With dictionaries, I spend a great deal more time looking up words I know than words I have never heard of–at least ninety-nine to one. The dictionary definitions of words you are trying to replace are far more likely to help you out than a scattershot wad from a thesaurus. 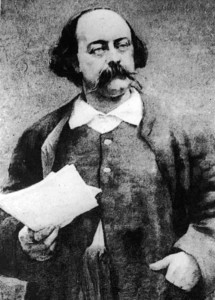 If you use the dictionary after the thesaurus, the thesaurus will not hurt you. So draw a box around ‘wad.’ Webster: ‘The cotton or silk obtained from the Syrian swallowwort, formerly cultivated in Egypt and imported to Europe.’ Oh. But read on: ‘A little mass, tuft, or bundle . . . a small, compact heap.’ Stet that one. I call this ‘the search for the mot juste,’ because when I was in the eighth grade Miss Bartholomew told us that Gustave Flaubert walked around in his garden for days on end searching in his head for le mot juste. Who could forget that? Flaubert seemed heroic. Certain kids considered him weird.”