September is the busiest month! Coming up next Friday is the fourth annual Booktoberfest at San Franciso’s legendary Mechanics Institute Library. If you’re a Bay Area publisher, author, editor, literary agent, book designer, or reader, September 26 is your night! Stop by 57 Post St. from 5 to 7:30 PM to quaff a locally brewed beer, taste a locally created snack, read a locally written book, hear about new developments in your field, and compare notes with others who share your interests.

Booktoberfest was first conceived as a grand finale for the Self-Publishers’ (now Indie Publishers’) Working Group, launched in January 2011 to help MIL members explore the 21st-century Gold Rush of print-on-demand and e-books. O brave new world! Kindles were new; the Espresso Book Machine was a sci-fi-class rumor; iPads didn’t exist yet. Booktoberfest began with two working mottos: Buy Local and Put the Pub Back into Publishing. From that sprout, librarian Taryn Edwards has grown Book’toberfest 2014. And as we near the end of our fourth year, members of the Indie Publishers’ Working Group have published enough books to fill a library shelf.

This year, in addition to display tables for Bay Area publishers, a side room will house 5-minute presentations by two dozen Mechanics Institute authors and other book artisans. 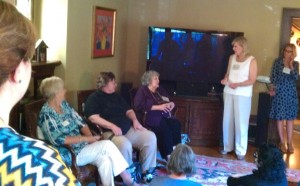 This past Saturday in Berkeley, the September meeting of Sisters In Crime celebrated three particularly illustrious members: Rhys Bowen, Priscilla Royal, and Camille Minichino, gracefully interviewed by chapter president Susan Shea (backed up here by Diana Chambers) and hosted by Terry Shames. Rhys’s latest mystery is Queen of Hearts Priscilla’s is Covenant with Hell; Camille’s (as Margaret Grace) is Madness in Miniature. Although the day’s honorees were induced to sign books afterwards, the focus was on sisterhood, in the metaphorical sense (men too are welcome as Sisters In Crime): mutual support, inspiration, and celebration.

Lurking around the corner in October: Litquake!